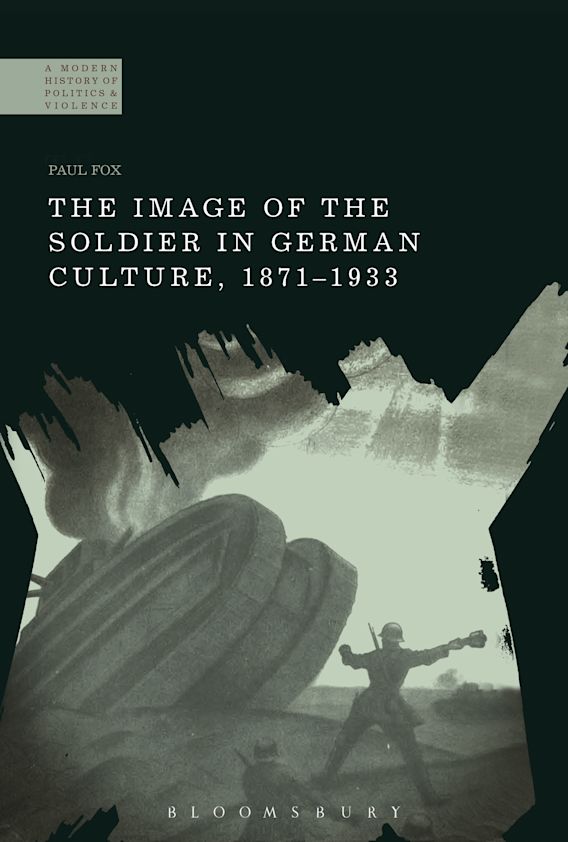 Paul Fox’s recent study, which takes a longue-durée approach to popular representations of Prusso-German militarism, tracing continuities from the mid-nineteenth century to the interwar period, purports to break substantial new ground. Fox contends that images of the German military which were marketed for consumption by the general public, such as illustrated histories, postcards, posters, and photobooks, as well as drawings and artworks, form a coherent corpus which has never previously been subjected to sustained analysis, due to the ostensibly ‘unpalatable’ and ‘unfashionable’ nature of its themes (p. 20). Fox blames the prevalent art-historical preoccupation with European modernism and its depictions of alienation, alterity and trauma for this long-standing lacuna, asserting that such categories are unhelpful when it comes to analysing mainstream cultural militarism, since they ‘[privilege] dissent without ever taking seriously what it was that was being dissented from’ (p. 9). Siting his inquiry within a broad spectrum of subfields, including memory studies, military philosophies, and theories of identity and performativity, he seeks to lay bare ‘discernible aesthetic and rhetorical codes, extending to dominant visual tropes, which served to shape, police and affirm judgments about what how [sic] a “real German” at war ought to behave, and what that implied about wider German identity and territorial integrity’ (p. 7).

While the sources which Fox has explored potentially encompass all forms of martial combat, including counter-insurgency, and futuristic imaginings of mechanised warfare, providing a generalisable mapping of that ‘cultural patterning’ which supposedly inculcated belief in a specifically German way of war, ‘characterised by an overweening will to battle, manifest in the translation of the military commander’s intent into offensive action’ (p. 2), his analysis focuses for the most part on two nineteenth-century illustrated histories by Adolph Menzel and Julius Pflugk-Harttung respectively, and two post-World-War-I photobooks by Ernst Jünger. Fox claims that the images in these visual sources can unproblematically be interpreted without any particular reference to the texts which they are illustrating – perhaps a somewhat convenient assumption, given the author’s self-confessedly recent and hard-won acquisition of the German language (cf. p. xii – this may also explain the relative dearth of relevant German-language secondary literature in the book’s brief nine-page bibliography, as well as the occasional slips in translation of the captions of illustrations; e.g. Fig. 11).

The monograph as a whole is divided into four parts, beginning with an extensive introduction entitled ‘Representing Armed Conflict in the Industrial Age’, which introduces the aims and methods of the enquiry. Part I, ‘Adolph Menzel and the Rhetoric of Command’, then examines artistic tropes of military conferences and battlefield exhortations through the lens of Riegl’s ideas concerning the portraiture of moral attention, focusing on two paintings by Anton von Werner, and some of the illustrations contained in Menzel’s Geschichte Friedrichs des Grossen (1842). Part II explores ‘Combat and the Politics of Landscape’ in the aftermath of World War I, seeking continuities in pre- and post-war depictions of conflict in contested borderlands, and exploring two of Ernst Jünger’s photohistories, which sought to create new phenomenologies of experience through their ‘photographic claims to documentary reality’, providing ‘reader-viewers’ with fresh understandings of the ‘military sublime’ (p. 116). Finally, Part III, ‘Technology and Combat’, explores the development of visual narratives of conflict which depicted soldiers’ interactions with battlefield technologies, in which fighting power was subordinated to the moral idea of the will to power, focusing above all on the moral superiority of common soldiers. Following the Franco-Prussian war, this dichotomy was epitomised by the arms race between rifles and artillery; meanwhile, during and after the Great War, it was the immense technological challenge which the tank posed to German martial virtues which was seen as paradigmatic of the dilemmas of the Materialschlacht. Medieval chivalric iconography of the Teutonic Order was often used to illustrate this neo-romantic fascination with the paradox of armoured man versus armoured machine.

Fox is undoubtedly to be commended in drawing attention to this substantial corpus of often overlooked visual material. However, as far as his overall argument is concerned, the sourcebase which he analyses seems far too small for his generalisations to convince. Moreover, it is often unclear how far some of the material analysed here genuinely fits into his ostensible argument, which often appears to get somewhat overlaid by thickets of over-analysis or incoherent theorising (Chapter 5, which treats aerial photography and maps, seems especially irrelevant to the over-arching thesis). Furthermore, there are numerous important methodological questions which are never satisfactorily addressed. Firstly, is it truly the case that the portraits and illustrations discussed here, especially in Part I, have no analogue in other military cultures – are they really so demonstrably and specifically German? There would surely have been scope here to bring in transnational perspectives; at the very least, it should be demonstrated beyond reasonable doubt that, for example, drawings and paintings of military conferences or battle exhortations (or depictions of war graves) in other national cultures during this period emphatically did not possess the supposedly ‘German’ traits which Fox ascribes to them. Secondly, what do we actually know about the nineteenth-century artists’ intentions, or contemporary reception of these images? Would ‘reader-viewers’ really have divined the complex psychological relationships in these engravings, and the meanings and interpretations of Prussian martial virtue, which Fox ascribes to them? Did many readers ever do more than take a cursory glance at the illustrations? For Fox’s argument to be fully convincing, therefore, more contextualisation and historicization, as well as detailed discussion of a much wider sourcebase, would be necessary. Ultimately, then, this attempt to fuse military micro- and macro-history with art-historical modes of analysis generally represents something of a missed opportunity, though it could still provide a potential starting-point for future research.