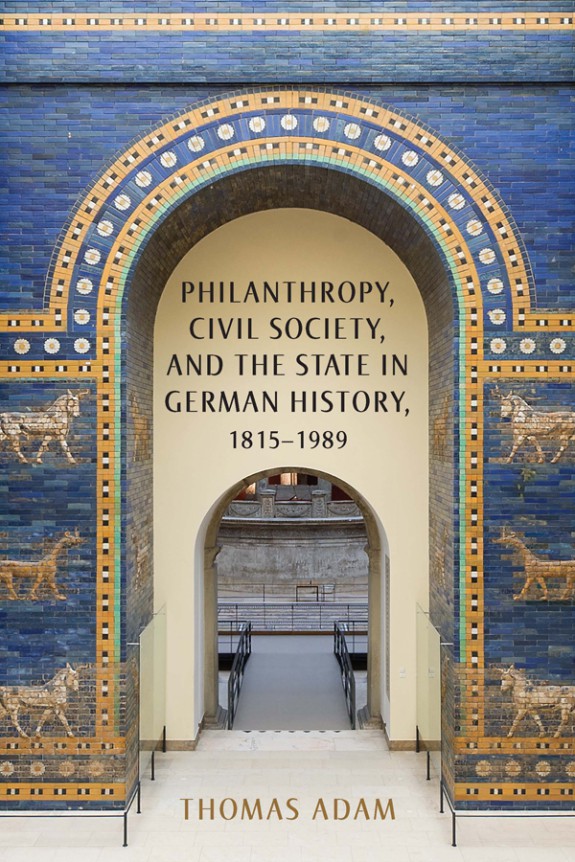 The primary aim of Thomas Adam’s survey of philanthropy and its entangled relationship with the State in Germany is twofold. Firstly, he wishes to emphasise the indispensability of private donations and endowments (whether funded by associations or by wealthy individuals) to the maintenance of social and civic institutions in the spheres of education, culture, and poor relief.

To this end, he asks his readers to imagine the cultural and social impoverishment of a hypothetical Germany without philanthropy, where no school or university scholarships existed to further the talent of middle-class children whose families had fallen on hard times, where the number of museums and art collections was radically diminished, where iconic archaeological finds such as the bust of Nefertiti or the Ishtar Gate (featured in glorious technicolour on the book’s cover) would never have been excavated due to lack of funds, where seminal research institutions such as the Kaiser-Wilhelm-Gesellschaft simply did not exist, and where social housing projects were completely unknown (perhaps contributing to endemic social unrest).

To counterbalance this bleak image, Adam argues that we must reconsider the supposedly all-powerful role of the German state(s) in funding public institutions in the modern period, acknowledging rather that Germany was ‘a superpower in the world of philanthropy’ (p. 124), providing approximately ninety times more funding through the efforts of civil society than England did on the eve of the First World War. He claims that this truth has been fundamentally ignored and misrepresented in Anglophone scholarship to date, and that the scale of state intervention in Germany has previously been ‘largely exaggerated’ (p. 2); hence his singular ability to provide his readers with what he terms ‘a radical reinterpretation of German history’ (p. 1).

His second, interlinked, aim is to ‘debunk entrenched myths’ which link the flourishing of civil society with democracy as a matter of course (p. 176), rather than with economic modernisation; if Alexis de Tocqueville had visited authoritarian Prussia rather than democratic America, Adam suggests, he might have found an even more vibrant network of civil associations, despite the absolutist tenor of the state’s governance. Meanwhile, the Weimar Republic’s democratic regime was actively responsible for the destruction of a vast amount of philanthropic capital, due to the government’s decision to devalue those war bonds which charitable organisations and public institutions had been forced into procuring indiscriminately. Tübingen University, for instance, whose philanthropic endowments of several million marks had survived the upheavals and crises of the Reformation, the Thirty Years’ War and the Napoleonic Wars unscathed, found its assets reduced by the Weimar State to a derisory 400,000 Marks by 1930. Centralisation and expropriation became the watchwords in this and in subsequent regimes, and the alienation of potential future philanthropists who looked on in horror at the effacement of previous donors’ legacies and wishes began to sound the death-knell for the age of philanthropy.

Adam focuses on the role of the ‘mixed economy’ of philanthropic and state funding above all in four spheres: museums (especially art collections); school and university scholarships and funds; archaeological excavations and research institutes, which functioned as national prestige projects, and social-housing initiatives. Where the author is at his most convincing is in the careful attention which he pays to the activity of female and Jewish philanthropists, and to the importance of regional variations in philanthropy and local particularism; this was a subnational, rather than a national, phenomenon, even at the height of the Kaiserreich – not least due to widely differing levels of industrialisation and urbanisation within and between the German states.

The absurdity of some of the philanthropists’ bids for social prestige is also tellingly detailed: for instance, the pompous theatricality of the richly-coloured senatorial robes with which honoured donors to the Kaiser-Wilhelm-Gesellschaft were presented in public recognition of their generosity, or the insistence of one donor who provided a 10,000 Mark scholarship for medics at the University of Rostock in 1892 that the university tend his grave in perpetuity – amazingly, this stipulation was carried out until 1980. Meanwhile, one can only sympathise with the dismay of the dignitaries of the Leipziger Kunstverein, whose focus on contemporary art was rudely displaced in 1858 by the donation by one Carl Lampe of a collection of 1,800 copperplate etchings of important thirteenth- to nineteenth-century paintings: ‘He insisted that the museum keep the collection together and show it only in the order in which he had arranged it’ (p. 25).

In general, however, Adam’s analysis is heavy in data (including a plethora of tables and statistics, both within and alongside the text), and contains very few quotations from original sources which might introduce a more human element into his narration; sometimes, one longs for a leavening of the catalogue of donors, donations, institutions and financial figures with quotations from patrons’ correspondence, for instance, or wealthy citizens’ reactions to the arrival of new collections at the museums in which they had recently become stakeholders. This tendency may in part be ascribed to the rather reactionary, Marxist-tinged historiographical model to which Adam adheres, framing his narrative in terms of the aims and aspirations to social dominance of the ‘bourgeois class’ (an entity whose attributes are never clearly defined, nor sited within any discussion of the voluminous German literature on Bürgertumsforschung). This trend is particularly obvious in Chapter One, which describes ‘the competition between nobility and bourgeoisie for dominance over arts and culture’ (p. 13) as a sort of zero-sum-game, seemingly assuming that all bourgeois citizens’ visions were well-nigh identical.

Still, Adam’s data-rich analysis could certainly prove useful for economic historians – although the paucity of primary citations is odd; less than a dozen notes in the entire book refer to archival sources, and the majority of the citations refer to secondary literature, a sizeable proportion of which stems from Adam’s own pen. Indeed, out of a scant eight-page bibliography, self-proclaimedly (and unhelpfully) ‘limited to publications that represent the new interest in exploring Germany’s philanthropic past’ (p. 203), nearly a quarter of the works cited are by the author himself – care might at least have been taken to ensure that all works cited in the endnotes were included.

In sum: although this book does provide the reader with a useful new lens through which to survey the philanthropic landscape of the Kaiserreich and beyond, Adam’s grandiose pretensions, and in particular his assertions that he has presented his readers with a ‘radical reinterpretation’ of German history, fail to convince.