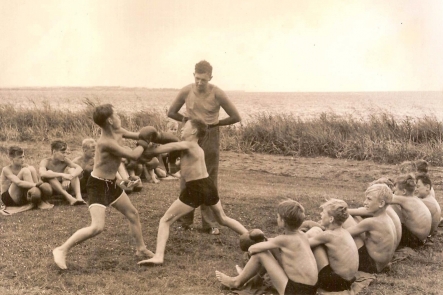 Ancient Sparta was particularly prized as a paradigm for Prusso-German military elite-education during the 19th and 20th centuries. Using a variety of sources, including previously-untouched archival material, this research project demonstrated that this analogy with Sparta was neither superficial nor accidental, but deep and systematic. Analysis of two case-studies, the Royal Prussian Cadet-Corps (1818-1920), and the Nationalpolitische Erziehungsanstalten (National-Political Education-Institutes), or Napolas (1933-1945), showed that generations of future German officers and putative Nazi leaders were often trained to see a ‘Spartan’ way of life as the ultimate goal to which they should aspire.

At the cadet-schools, self-identification with young Spartans became instrumental in helping boys to accept the hardships of military socialisation; this identification was encouraged both by older cadets and by the school authorities. In political debates concerning the cadet-corps, ideas of Sparta then became conceptual weapons in the battle between the forces of reactionary monarchist conservatism and the adherents of Social Democracy and liberalism.

At the Napolas, National-Socialist ideology was frequently used to portray Sparta as an ancient precursor of the Third Reich, and boys were particularly encouraged to embrace Spartan models of courage and self-sacrifice, such as Leonidas and the 300 Spartans who fought at Thermopylae.

Through correspondence and conversation with over sixty octogenarian ex-pupils of these schools, and by using contemporary documentary sources, the impact which such Spartan ideology had on Napola-pupils on a personal level has (at least partially) been reconstructed. The project also investigated the ways in which the politicians who founded the Napolas conceived of Sparta as a model for the schools.

A monograph based on this research project, entitled Sparta’s German Children. The ideal of ancient Sparta in the Royal Prussian Cadet-Corps, 1818-1920, and in National Socialist elite schools (the Napolas), 1933-1945, has now been published by the Classical Press of Wales.

Articles based on this project include: