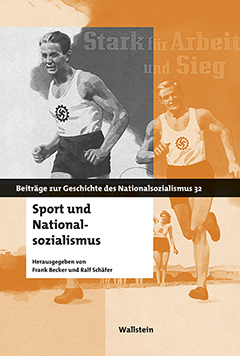 Right from their very inception, sport was always a crucial part of life at the Nationalpolitische Erziehungsanstalten (aka NPEA or Napolas), the most prominent type of Nazi elite-school.

From the gruelling process of physical and racial ‘Auslese’ which prospective pupils had to undergo during the week-long entrance examination, or the school timetable, which dedicated every afternoon to sporting or CCF-style activities, to the wealth of extracurricular opportunities provided for learning exotic or elite types of sport such as riding, fencing, driving, gliding, sailing and skiing, pupils’ time was dedicated just as much to physical training and exercise as it was to academic or intellectual pursuits.

Indeed, some Napolas consciously felt the need to stress in press releases or publicity statements that they were much more than mere ‘sports schools, in which physical training is “writ large” and some teaching happens “on the side”‘.

Nevertheless, the abundant variety of sporting activities on offer at the NPEA, and the state-of-the-art facilities and equipment with which they were supplied at vast state expense, contributed significantly to the attraction which they exerted on potential pupils; the schools’ sporting programme seemed to offer numerous paths towards the realisation of individual achievements, as well as granting fulfilment as part of a team, or of the Napola community more generally.

Interestingly, sports fixtures also formed a valuable part of the programme of cultural diplomacy which the NPEA initiated during the mid-to-late 1930s, particularly during numerous tournaments and exchanges with British public schools. From this perspective, we can interpret some of these sporting engagements as a means of seeking victory on the playing-field before it could legitimately be sought on the battle-field.

In similar vein, the Napolas’ annual Wettkämpfe and Manöver, at which all the schools competed with each other keenly, were seen as an important part of forging individual schools’ identity (for instance, the Anstaltsleiter of one NPEA, Plön, was notorious for expelling any pupil who failed to gain the requisite number of points). However, these contests were also strongly oriented towards premilitary training – as were the Geländespiele (cross-country war games) in which boys at all schools regularly had to take part.

Although, as the Second World War progressed, the Napolas also began to experience a severe shortage of qualified sports teachers, as more and more teachers were called up to fight, the schools’ privileged position as a Führer-approved source of guaranteed officer cadets ensured that their sporting facilities remained largely unrequisitioned, and sporting education could continue without undue hindrance until the final stages of the war – although ever more emphasis was placed upon its military application.

Yet, surprisingly, sport at the NPEA has never been the subject of a systematic scholarly appraisal – indeed, the history of sport in schools and in the Hitler Youth more generally during this period appears to have been relatively overlooked. This essay therefore aims to provide the first overarching study of sport at these elite schools, which the regime had invested with the crucial task of training future leaders of the Third Reich in all walks of life.

Above all, the article argues that the NPEA provided a sphere within which the National Socialist regime was uniquely able to realise its ambitions to instrumentalise sport and physical education in the service of the racial health and military fitness of the Volksgemeinschaft (the national or racial community). Although historians of sport in the Third Reich must constantly be wary of erroneously supposing that the regime’s instrumentalisatory ambitions and propaganda truly reflected realities on the [sports]ground, the NPEA do seem to constitute one domain in which many of the Nazis’ ideological programmes for physical education do genuinely appear to have been realised in practice.