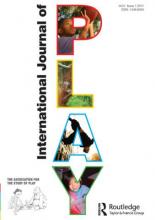 Review essay, published in the International Journal of Play 5 (3), 2016 (special issue on Histories of Play, edited by Kate Darian-Smith and Simon Sleight), pp. 343-345.

It is a telling irony that the era which had, at its outset, been hailed as the ‘century of the child’ should, within a few decades, have caused a myriad children such untold suffering. In the Holocaust alone, 1.1 million children lost their lives, and the infant death toll in its entirety will inevitably have been far higher. Whether through the cruelties of occupation, evacuation, starvation, firestorms or mass genocide, the youth of Europe experienced the Second World War as a terrifying caesura; an utter abnegation of the natural order of things, in which adults were often powerless to act, or to prevent a detested enemy from striking at all they held dear.

And yet, as June Factor’s essay in a previous issue of this journal has emphasised (IJP 2016, Vol. 5, No. 1, pp. 105–106), scholars such as George Eisen have shown how fertile the spirit of play can be amongst children anywhere, however harsh or horrific their circumstances. Whether playing in bomb craters – or even in the shadow of the chimneys of Auschwitz – children have used the medium of play to make sense of their surroundings, and even to enact strategies which might help them to survive within an almost unbearably brutal reality. Eisen’s groundbreaking study, Children and Play in the Holocaust: Games Among the Shadows, is certainly invaluable in its own right, as a striking documentation of ‘a novel and unfamiliar dimension to the tragedy of European Jewry in general and of children in particular’ (p. 11). However, it has also proved, whether tacitly or explicitly, to be an inspiration to more recent scholars who have explored the history of childhood during Europe’s dark twentieth century in greater depth.

Foremost among these is Nicholas Stargardt, whose book Witnesses of War: Children’s Lives under the Nazis (first published in 2005) provides a uniquely comprehensive and accessible study of childhood during the Third Reich. As Eisen did in his own work, Stargardt has frequently emphasised the cardinal fact that ‘in all wars, children are victims’ (p. 7), whilst also encouraging us to treat them as actors in their own right, rather than as passive, inarticulate and isolated sufferers of ‘trauma’ (pp. 8–9) – ‘the objects rather than the subjects of history’.[1] In this context, drawing in part on Eisen’s own work, and partly on material garnered from his own research, Stargardt has noted the inherent tension between ‘the apparent universality of children’s games and undertakings and the very specific historical contexts in which they played’.[2]

Whilst the themes of play have often focused on the protagonists of contemporary conflicts in the adult world – whether ‘cowboys and Indians’, ‘Jews and Gestapo’ or ‘coal thief and engine driver’ (this last played both in Poland in 1940, and then in Germany in 1946) – here, they also incorporated children’s reactions to collective humiliation, and to their fear of their families’ impotence against the hostile threat presented by a seemingly invincible enemy.

At the same time, Stargardt’s work encourages us to look beyond the fates of the children of the Holocaust whom Eisen so humanely, and even lovingly, described. Focusing on the most extreme form of suffering cannot do justice to the huge variety of childhoods encompassed by Nazism:

“Because the Third Reich shaped their lives so profoundly, children are particularly appropriate subjects for [exploring its wider social history]. Their capacity for treating the exceptional as normal reveals how deeply Nazism reached into society, dividing them between those who were destined to rule and those who were to serve; ultimately between those who were to live and those who were to die. Children’s experiences deserve to be understood across the racial and national divides, not because of their similarities but because their extreme contrasts help us to see the Nazi social order as a whole. Children [ … ] lived in the war, played and fell in love during the war; the war invaded their imaginations and the war raged inside them.” (p. 17)

Two recent publications in German show just how valuable such an approach to childhood in Nazi Germany can be, whether we consider the pre-war years immediately following Adolf Hitler’s seizure of power in 1933, or the duration of the Second World War itself. Indeed, the title of the first study, by Heidi Rosenbaum, ‘In spite of it all, it was still a lovely time’, speaks volumes for the attitudes of many Germans who grew up during this period, even today. Rosenbaum’s in-depth exploration of childhood in four varied milieux in lower Saxony (middle-class households in the university city of Göttingen, workers’ families in the town of Hann. Münden, and the denizens of a partially industrialised Protestant village community and a tiny Catholic hamlet respectively) pays specific attention to the role of play in each group of children’s lives.

Building on a sizeable collection of oral history interviews, the project on which the book is based reveals above all the remarkable normality of the games, toys and Kindheitsräume (spheres or spaces of childhood) recalled by its participants. The National Socialist regime’s accession to power was rarely remembered as an abrupt caesura, and, apart from the gradual impinging of Hitler Youth and BDM (German Girls’ League) activities on boys’ and girls’ lives (which, at least for poorer children, were often experienced as a welcome relief from chores around the homestead), there was little to demarcate the state of affairs in 1933 and afterwards from that of preceding years. Only the recollection of a Hitler Youth Quex plush doll (the hero of an eponymous film about a young Nazi martyr), or the odd swastika-emblazoned toy, as well as the sudden and little- remarked disappearance of Jewish playmates, hinted at the political impact of the new government. Apparently, even these intimations of the Nazification of Germany were very rarely perceived by the children themselves as being explicitly politicised, and, whether out of fear of betrayal or genuine conviction, it was rare for adults to speak ill of the regime within their hearing.

Of course, this only held true of those children whose families were neither persecuted nor marginalised. Jewish families and their relatives, as well as children from oppositional communist or socialist backgrounds, were all too aware of their precarious position. Bastian Fleermann and Benedikt Mauer’s multi-layered volume on war childhood in Düsseldorf, Kriegskinder, designed as a readable and richly illustrated accompaniment to an exhibition on the same theme, also includes eyewitness testimonies which highlight the other side of the coin: for a Jewish child, playing on the street could quickly turn from favoured pastime into hideous nightmare when all the other children ganged up on their erstwhile playmate, yelling ‘Jew! Jew!’: ‘Then obviously we’d […] come home and cry bitterly’ (p. 205).

Sinti children in Düsseldorf also faced a bitter lot, once they had been interned in the local ‘gypsy camp’ run by sadistic commandant Julius Arends. Arends forbade the children from playing amongst themselves, but would then set his Alsatian on them, with a mocking cry of ‘He only wants to play!’ (p. 190). Most of these children would later have died in one of the death-camps; the contrast with those supposedly authentically ‘German’ children who merely had to suffer the privations of a KLV (children’s evacuation programme) camp, or the horrors of aerial bombardment, is salutary.

Nevertheless, the testimonies collected here, which were mainly sent in by readers of a local newspaper in response to a call in August 2009 for memories of childhood experiences during the Second World War, demonstrate that, for these children, just as much as for Eisen’s youthful inhabitants of the Jewish ghettos and camps, playing and playthings were a paramount part of life, even in harsh and terrifying situations. Thus, Renate S.W. recalled how deeply she had mourned her beloved roller skates, which were immolated by the fire-bomb which destroyed her home (p. 74), whilst Karl-Heinz B. insisted on carrying his electric model railway in a rucksack as his family attempted to make their way to safety in 1945, even though it was far too heavy for him (p.114). Another boy begged his parents to send his model railway to assuage his homesickness in the spartan conditions of an evacuee camp, attempting to persuade them with the same rationale that had led them to send him there: ‘Then it won’t be damaged in an air raid!’ (p. 148). Adelgunde S., meanwhile, remembered that the strangeness of having to practise wearing gasmasks at school was alleviated by the pretence that she and all her friends had turned into little elephants (p. 106).

In their different ways, these four books highlight the astounding heterogeneity of children’s fates under the Third Reich, whilst illuminating the ways in which they attempted to exercise their own agency in an increasingly hostile and dangerous world. From this perspective, the games that these children played, and the toys that they played with, were often a crucial comfort; a way of extracting meaning from or interpreting the adult world, even when adults could no longer be relied upon to protect them.