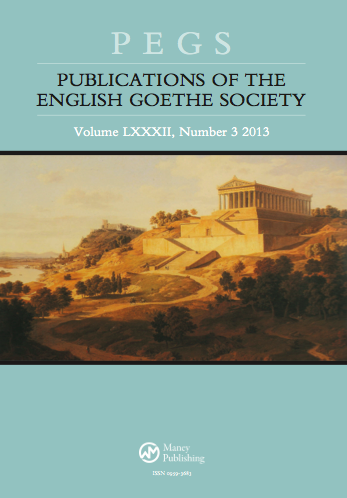 The last two months have seen the appearance of two articles on very different topics. The first, entitled ‘”Anti-Enlightenment”: National Socialist educators’ troubled relationship with humanism and the philhellenist tradition’, was published in the latest issue of Publications of the English Goethe Society, a special issue dedicated to the topic of German philhellenism (for more information on the other articles in the volume, click here).

Meanwhile, the second article, entitled ‘Spartan Supremacy: A “Possession for Ever”? Early fourth-century expectations of enduring ascendancy’, appeared earlier this month in an edited volume on Hindsight in Greek and Roman History, edited by Anton Powell. The essays in this volume originated in a panel on ‘Hindsight: the importance of unfulfilled expectations in Greek and Roman history’, which formed part of the Sixth Celtic Conference in Classics, held at the University of Edinburgh in July 2010.

The volume as a whole is intended to open up a new field of methodological enquiry, not only in Classics and ancient historiography, but across other historical disciplines. It is intended chiefly as a demonstration to the practising historian that attention to the working of hindsight can improve performance of the historian’s traditional activity. For instance, do traditional causal statements, or suggestions, by historians already imply virtual history? Do they implicitly make a statement as to what would have happened if the events identified as causes had not occurred? Do historians’ explanations, and the causal generalisations to which they – explicitly or implicitly – appeal, imply that they are possessed of rules capable of generating predictions? In an attempt to answer these questions, this collection of essays advances a method of illuminating almost every ancient episode for which there is evidence of what historical agents planned, anticipated – or feared. The authors argue, through the study of diverse episodes central to the study of Antiquity, that hindsight has, by playing down or eliminating the record of unfulfilled forecast, obscured the past.