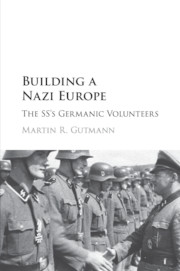 Martin R. Gutmann’s monograph lucidly demonstrates that nationality need be no bar to conniving in atrocity, or the will to participate in Nazism’s violent and genocidal vision for a new Europe. This study of Waffen-SS leaders from three neutral countries – Switzerland, Sweden, and Denmark – clearly shows that the idea of a New European Order led by a federation of ‘Germanic’ nations (with Germany at their head) was at least partially created by these volunteers themselves.

Taking a subsection of these ‘neutral’ members of the Waffen-SS leadership corps and Himmler’s Germanische Leitstelle (office for Germanic affairs), a key organ in the recruitment and indoctrination of ‘Germanic peoples’, Gutmann treats these men as historical actors in their own right, rather than dismissing them as mere gullible dupes, coerced by Nazi pressure and propaganda, or subscribing to exculpatory national caricatures which depicted them as crazed criminals, fanatics, and misfits. Instead, drawing on a wide range of primary source-material, including ego-documents, institutional and intelligence files and interviews, and postwar judicial proceedings, Gutmann is able to present a much more compelling and nuanced picture. His analysis shows that the majority of the one-hundred ‘most influential and high-ranking neutral volunteers’ whom he selected for his case-study fit the patterns already established in recent German perpetrator research (Täterforschung): highly educated, cosmopolitan, ambitious and intellectual. Some already held influential positions in academia, government, industry, or the military in their respective native lands. Ultimately, these men only became truly disillusioned in their dream of realising the National Socialist new world order when it became obvious that Nazism’s fundamental chauvinist intransigence, manifested as a refusal in many quarters to treat the ‘Germanics’ as true equals, and often leading to their maltreatment and harassment by German superiors in a military context, was unrelenting. Even so, many cast themselves in the post-war period as the true adherents of an ‘ideal’ National Socialism which Germany had heinously and hideously perverted. Their prior – and continuing – commitment to a form of transnational fascism constrained less by national borders than by broader ideas of cultural and racial superiority also has interesting implications for the study of fascism as histoire croisée (as the author rightly observes).

Gutmann’s thorough and informative introduction sets the scene by posing the key question raised by the fact that many neutral volunteers were still fighting to defend the Third Reich to the last in the final battle for Berlin in 1945: Why did men whose homes were threatened neither by the Axis nor the Allies ‘volunteer to murder and die for a brutal, racist and foreign ideology?’ (p. 2). The subsequent chapters then move on to illuminate various aspects of the volunteers’ experience, and the SS institutional framework which encompassed them, paying especial attention to the development of the Germanische Leitstelle, and its polycratic wrangling with other organs within the SS and Nazi hierarchy, including the SS-Führungshauptamt and the Foreign Office. The swift rise of the Germanische Leitstelle’s Swiss director, Dr. Franz Riedweg, along with 1940’s Blitzkrieg victories, led to a burgeoning of Himmler’s ‘Germanic’ recruitment policy, and the creation of new Waffen-SS regiments specifically in order to accommodate ‘Germanic’ volunteers. At one point (c. 1941), the Germanische Leitstelle’s secretive plans for a Europe-wide SS-led ‘Germanic foreign policy’ included preparations for imminent Anschluss with Switzerland, involving the creation of a militarily-trained Swiss SS fifth column, whose task was to catalogue Jews and other undesirables within the country, and to pave the way for a swift Nazi takeover (Chapter 1).

Chapters 2 and 3 explore the volunteers’ political, social, and intellectual backgrounds, and their motivations for enlisting in the Waffen-SS: many rued their countries’ decision not to participate in World War I, and some might have found a less unsavoury outlet for their lust for action had they been born citizens of an imperial power in need of able and adventurous administrators. The majority were convinced that Germany’s anti-Bolshevik crusade was both politically and morally justified (as were many Swedes, Swiss and Danes at large, at least at the outset of Operation Barbarossa); they saw no difficulty in reconciling their collaboration with a sense of genuine national patriotism. Chapters 4 and 5 then treat the propaganda peddled both by the Germanische Leitstelle (including its in-house periodical, the Germanische Leithefte), and at the specifically ‘Germanic’ officer training-courses held at the SS-Junkerschule in Bad Tölz. Many of the volunteers contributed to these publications, and were employed as instructors on the courses at Tölz, but in the end, the naïve version of National Socialist federalism which they promoted had little basis in reality. Finally, Chapter 6 charts the ever-worsening cycle of violence and harassment visited upon the volunteers by their German superiors, as the utopian (or dystopian) prospect of the Greater Germanic Reich for which they longed receded ever further over the bloodstained horizon. The chapter also briefly treats each nation’s subsequent attempt to deny the volunteers’ national and historical significance during the postwar period, whether through execution and incarceration (Denmark), revoking their citizenship (Switzerland), or instigating a policy of ‘live and let live’ (Sweden).

Overall, Gutmann astutely fuses concise descriptions of key developments in these three nations’ foreign policy (and their changing political attitudes towards Germany) with the personal and ideological convictions of individuals, whilst also deftly outlining the constantly-shifting relations between the morass of competing Nazi organisations both within and outside the SS. While it might have been interesting to present the reader with a little more detail on the ways in which Nazi ‘Germanic’ propaganda was adjusted to appeal to each nation individually – for instance, Gutmann notes that recruitment posters in Scandinavia might feature a Viking silhouette behind the figure of a contemporary stormtrooper – the book as a whole is highly original, illuminating and well-written. Above all, it sheds fresh light on transnational developments in the history of the Third Reich and the history of fascism more generally, as well as highlighting lesser-known institutions within the SS’ colonial apparatus. Ultimately, Gutmann demonstrates that the logical conclusion of Nazi chauvinism utterly precluded true respect and cooperation between nations – illuminating the fundamental incoherence of the competing visions of a New Europe which lay at Nazism’s heart.