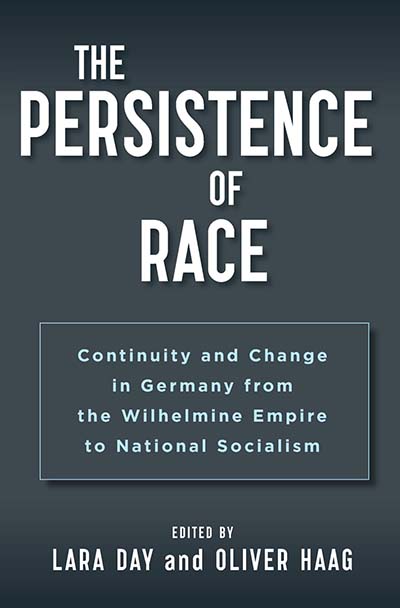 in The Persistence of Race: Continuity and Change in Germany from the Wilhelmine Empire to National Socialism, ed. Lara Day, Oliver Haag, Oxford (Berghahn) 2017, pp. 65-86.

At the turn of the twentieth century, the idea that the destinies of races, nations and empires were universal and biologically determined (wherever and whenever in human history they existed) was the preserve of a minority of racial theorists and academics. However, within a few decades, such ideas came to dominate National Socialist thought, and were propagated in ideological and educational material throughout the Third Reich.

Using a variety of examples drawn from these racial interpretations of history, concerning both the ancient and the modern world, this article argues that this inculcation of a particular racial historical framework follows very closely the model of ‘schematic narrative templates’ devised by the sociologist James Wertsch. Wertsch’s work has shown that a crucial element in the formation of collective identity is provided by forcing historical occurrences to fit into a consistent, immutable narrative framework, which can be used both to justify and to legitimise the actions of the nation or ruling power in question.

Whether in relation to the rise and fall of the Roman Empire and the Greek city-states, or the workings of the British Empire and the supposed mission of the Third Reich itself, historical events began to be presented in a way which assumed the dominance of the Nazis’ desired racial schematic narrative template, and which ultimately attempted to discredit all deviant, non-racially-motivated interpretations of world history.

This article aims to explore the development of this phenomenon, and to analyse the ways in which schematic narrative templates of race came to dominate intellectual and historical thought during the 1930s and 1940s. At the same time, the roots of this historicisation of race in the nineteenth and earlier twentieth century, and the expansion of such ideas during the Weimar Republic, are also taken into account.