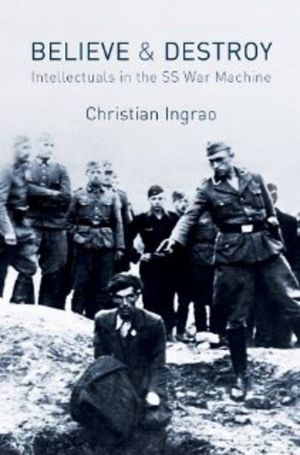 In 2006, a publishing sensation erupted in France with the publication of Jonathan Littell’s The Kindly Ones, a novel which sought to recreate the motivation and incremental brutalisation of an intelligent, educated SS officer serving in the Occupied Territories during World War II, as he becomes ever more damningly implicated in the horrors of the Holocaust. Narrated in the first person, Littell’s novel presents a chilling, yet often highly compelling delineation of the gradual coarsening and psychological desensitisation which might ultimately enable a rational, ambitious individual to pursue such a bloodsoaked and nightmarish path. In so doing, Littell’s narration also provided a creative, literary counterpart to those non-fictional studies of Nazi perpetrators and their motivation (such as Christopher Browning’s Ordinary Men and Daniel Jonah Goldhagen’s Hitler’s Willing Executioners, to name but two) which have inspired so much scholarship and debate in recent years.

It is in this spirit, too, that Christian Ingrao’s most recent monograph on the actions and the mindset of ‘intellectuals in the SS war machine’ has been conceived. However, it should be noted at the outset that readers hoping for an initiation into the most recent realms of Täterforschung will be sadly disappointed. Despite first appearing in print in France in 2009, the work’s content and bibliography remains resolutely un-updated since its original incarnation as a doctoral dissertation completed in 2001 – a fact which Ingrao admits unapologetically in his concluding afterword (pp. 261-5). As a particularly egregious example of this less than satisfactory state of affairs, Michael Wildt’s exhaustive study of a largely identical (if somewhat wider) sample of SS leaders, An Uncompromising Generation: The Nazi Leadership of the Reich Security Main Office / Generation des Unbedingten: Das Führungskorps des Reichssicherheitshauptamtes (first published in 2002), finds no mention whatsoever in Ingrao’s bibliography, meriting only a single dismissive paragraph in the aforementioned afterword (p. 264). From this perspective, the dustjacket’s claims regarding the ‘pioneering’ nature of Ingrao’s study do not seem to be as wholly justified as they might have been, had the dissertation been published shortly after its completion.

In general, the work’s structure is rather diffuse – it is not always quite clear whether the volume is intended to present the personal history of a group of individuals, an intellectual history of SS activism, an institutional history of the SD, or an elucidation of the violence of the Einsatzgruppen – at one time or another, it seemes to touch on all of these without committing fully to any one of them. Furthermore, the flow of the argument, both within individual chapters and within the work in its entirety, often appears rather opaque.[1]

Nevertheless, there are some illuminating insights to be gained from Ingrao’s innovative combination of anthropological and sociological concepts reminiscent of the Annales school with the tools and theories of the modern archival historian.[2] Ingrao is interested above all in anatomising the Gefühlswelt or subjective inner worldview of the eighty or so SS ‘intellectuals’ (i.e. university-educated individuals) whom he has chosen to study, seeking to delineate an anthropology of SS violence, and portraying Nazism as a consoling belief system which enabled the generation of young men who were born just too late to experience the extreme bonds and terrors of trench warfare to come to terms with the cataclysmic aftermath of the First World War (pp. vii-xi).

In this context, Chapters 1-5 explore the historical and psychological background of the generation who were to go on to form the SD elite and command the Einsatzgruppen; the formation of SD networks, and the trajectory of intellectual activism among their adherents – particularly in an academic, university context (here, the similarities with Wildt’s work are at their most marked). Chapter 6 also gives an account of the SD’s rise from inauspicious, cash-strapped beginnings in a Munich apartment (which served both as the service’s central office and the Heydrichs’ family home) to an incredibly powerful multi-departmental security service, comprising the eyes, ears, and (later) the elite execution-squads of the Third Reich. Chapters 7-9 (discussed in more detail below) then go on to explore correlations between the rhetoric and action of SD violence, while chapters 10-11 explore SS intellectuals’ reactions to defeat and post-war trials, attempting to ‘draw up a typology of the behaviour of SS intellectuals when facing…their own deeds and guilt’ (p. 228) through legalistic strategies of expression and evasion.

In general terms, three themes bulk particularly large within Ingrao’s investigation as a whole. The first, fuelled by the defensive rhetoric employed during World War I and the trauma and violence which followed in the wake of Germany’s defeat, is the SS leaders’ conviction that they were surrounded by a ‘world of enemies’, involved in a conflict whose stakes were eschatologically high, and to which only Nazism could provide a victorious solution. Ultimately, Ingrao argues, constant childhood exposure to propaganda against foes who were portrayed as uncivilised or even (in the Russian case) subhuman, followed by such a catastrophic loss of sovereignty, inspired these men to dedicate themselves to careers of ‘defensive activism’, first, academically and bureaucratically, with the pen; later, genocidally, with firearms. In this context, the growing racialisation and biologisation of conceptions of Nazism’s enemies formed part of a ‘raciological interpretative grid’ of ideological discourse (p. 52) which could later be used to justify even the most extreme violence against those who opposed the new world order.

These ideological, perceptual and emotional links could lead very quickly to a terrifying escalation of violence on the ground, once World War II was underway. A toxic mixture of atavistic fears of the wild wild East and its ‘Judaeo-Bolshevik’ hordes, a terror of snipers and partisan attacks which had been ingrained in the German collective military imagination since at least 1914 (if not long before), and the conviction that this was a just and lawful war being fought against a barbaric enemy, or even a ‘symbolic reparation’ for the travails of 1918-1919, combined to effect a swift transition ‘from the discourse of security to the discourse of genocide’ (p. 142). Annihilation could always be justified in the name of pacification, and the massacre of Jews in ever-increasing numbers was seen as a perfectly legitimate response to the danger supposedly presented by Jewish rabble-rousers, arsonists and franc-tireurs. Ingrao argues that the SS’ ‘system of representations’ was absolutely critical to the escalation of genocidal action, with the physical neutralisation of potential opponents increasingly being both perceived and portrayed as a crucial security measure, rather than as an act of barbarism.

Secondly, we have the theme of ritual, where Ingrao most clearly acknowledges his debt to the anthropologists. He argues that the commanders of the SD Einsatzgruppen tended to codify or ‘ritualise’ the practice of mass shootings in an attempt to spare their men psychologically, instigating shifts so that guilt might be distributed equally amongst all members of the unit, or allocating two soldiers to shoot each victim (one for the head and one for the heart), or making sure that the order to shoot took the form of a military command rather than the timing being left to an individual’s discretion – in short, physically distancing the victims from their executioners, and collectivising the act of violence. Ingrao sees the development of such standard procedures for massacre as ‘[forming] a set of murderous skills whose major invariants comprised the essence of the Nazi violence of elimination’. These ‘collective ritualistic frameworks’ thus represent ‘the cultural construction of a violence conditioned by representations’ (p. 184) which constantly fed and nourished the fiction that genocide could be conceived as a legitimate military act.[3]

The final element in the SS intellectuals’ world view comprised what Ingrao terms ‘millenarian’ or utopian racial hopes of creating a brave new German world in the newly-conquered Eastern territories, involving the opportunity to build ‘an ideal society based on racial determinism’ (p. 129) through mass population transfer, increased ‘Aryan’ birth rates, and extermination or planned famine for all those considered biologically unworthy. Again, such visions can be seen as a projection and magnification of interwar tensions and anxieties, which mourned the fate of volksdeutsch communities marooned in a sea of hostile and inferior Slavs. From this perspective, genocide could simply be portrayed as a necessary evil; an essential precondition of Germanisation, without which the Nazi utopia could never be safely or adequately realised.[4]

Ultimately, this racial fundamentalism left the SS completely at a loss as defeat loomed ever nearer; their worldview was utterly unable to cope with the colossal mismatch between their biologically- and historically-determined expectations regarding the subhumanity of the Russians, and their own inexplicable failure against Soviet forces on the ground. Thus, in complete denial that defeat was even conceivable, the SS Personnel Department continued to dish out promotions and decorations to its staff even as April 1945 drew to a close (p. 216). Meanwhile, other divisions determined to fight to the bitter end, with RSHA Amt VI forming ‘sabotage schools’ intended to create guerrilla forces behind Allied lines, with teaching on how to handle explosives, conduct interrogations, and other such skills and tactics (p. 222). Even the other stock SS reaction, the attempt to negotiate a separate peace with the Western Allies in the name of a ‘Western crusade’ against Bolshevism, was still informed by unquestioned racial assumptions.

In this context, genocide appeared to be merely one front in a war in which everything was at stake, or, as Ingrao puts it: ‘anxiety and fervour thus merged to generate an absolute violence’, caused by an unholy trinity of ‘millenarian fervour, eschatological anxiety and defensive imaginaire‘ (pp. 159-60).

In conclusion, there are a couple of general criticisms which should be mentioned. Firstly, the work’s style possesses a certain grandiloquence which may at times seem offputting – so steeped in a particular brand of French intellectualism that it may fail to convince those of different scholarly traditions entirely. Furthermore, the overly rhetorical prose contains, in the present author’s view, an unacceptable amount of unfounded speculation, littered as it is with sentences beginning “doubtless” (e.g. pp. 16, 103, 170), or expressions such as “this surely showed…” or “is it unreasonable to think that…?” (p. 10). Such constant piling up of circumstantial assumptions seems out of place in a volume purporting to be a work of historical scholarship. Moreover, Ingrao often treats certain sources – a lecture here, an article there – as utterly paradigmatic of the SD or SS worldview, without any justification for choosing these particular sources or treating them as representative (for an example of this, see pp. 100ff).

To sum up, this is certainly a book which can provide some fascinating insights, as well as an illuminating journey into the Erfahrungsgeschichte of the sample of eighty SS ‘intellectuals’ whom the author chose to investigate (indeed, in the case of the Einsatzgruppen, he goes well beyond this). Nevertheless, the opacity of Ingrao’s arguments, and the turgid nature of his prose in translation, often leave something to be desired. Although Believe and Destroy may deal with some of the same philosophical questions as The Kindly Ones, therefore, Jonathan Littell need fear no competition from his academic counterpart in the readability stakes.

[1] Chapter 6 provides a good example of the ‘bittiness’ of the work’s structure; on a first reading, it appeared merely to present a series of riffs on seemingly rather unrelated tropes, with too little signposting to enable the reader properly to appreciate the connections between them.

[2] Though it should be noted that Ingrao himself denigrates what he terms ‘the myth of archival exhaustiveness’ (p. 264). (The cynical reader might wonder whether this is merely a convenient ploy to excuse his not having covered so great an amount of archival material as others – including Wildt – have done when researching the same topic.)

[3] In similar vein, Ingrao interprets the treatment of Jews by the Einsatzgruppen during Operation Barbarossa as first mirroring that of wild beasts who must be hunted, then – once they had been ghetto-bound and the threat they supposedly represented had been neutralised – they were treated as domesticated animals who might be slaughtered with impunity, including their young (p. 151).