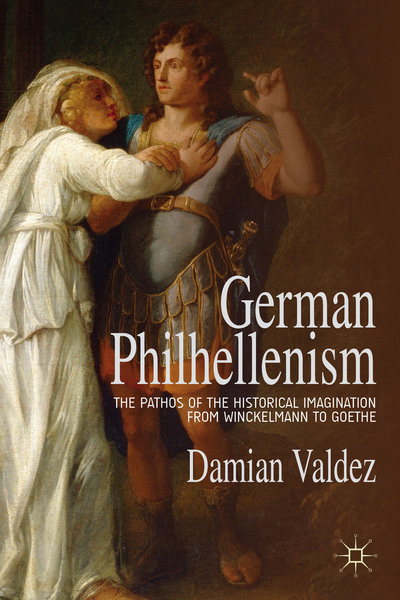 Review of Damian Valdez, German Philhellenism: The Pathos of the Historical Imagination from Winckelmann to Goethe (Basingstoke: Palgrave Macmillan, 2014), in Journal for Eighteenth-Century Studies 40 (1), March 2017, pp. 138-9.

Damian Valdez’s specialist investigation of German graecophilia delves deeply into contemporary conceptions of philosophy, morality and aesthetics. Ranging far beyond the reach of Eliza M. Butler’s The Tyranny of Greece over Germany (Cambridge, 1935), and conceived as a complement to more recent studies such as Suzanne Marchand’s Down from Olympus: Archaeology and Philhellenism in Germany, 1750-1970 (Princeton, 1996) or Katherine Harloe’s Winckelmann and the Invention of Antiquity: History and Aesthetics in the Age of Altertumswissenschaft (Oxford, 2013), his work aims to clarify ‘what makes it meaningful to speak of philhellenism, as opposed to a cheerful evocation of Greek themes’ (p. 5), identifying Greece’s unique position in ‘a philosophical geography of symbolic representation’ (p. 50).

Valdez’s monograph provides a keen dissection of the clashing currents of idealism and historicism which shaped German thought on ancient Greece during the eighteenth century, placing idealism – and particularly idealists such as Goethe, Herder, Schlegel and Winckelmann – squarely within their respective historical and intellectual contexts. From this perspective, the historicity of the ancient Greek world forms a key concept in Valdez’s narrative. Through his analysis of the work of scholars such as Christoph Meiners (1747-1810) and Friedrich Jacobs (1764-1847), he shows clearly how contemporary concerns about the role of women or the problem of luxury were played out and debated on an antique stage. Nor were such questions of ancient Sittengeschichte merely the preserve of mouldering antiquaries or professors in Göttingen’s ivory towers; rather, they resonated widely with the educated public, who would avidly devour the debates on Greek femininity or the virtues of male friendship which were presented to them in mainstream periodicals such as Der Teutscher Merkur or Attisches Museum.

The value of Valdez’s work lies most obviously in his demonstration that Germany’s worship of Greece was always more conditional, more contingent than has often been fully appreciated heretofore. Neither does he underestimate the importance of Biblical antiquity as a key counterweight to the pull of philhellenic ideals. That it might be more fruitful to think in terms of German ‘philhellenisms’ in the plural, rather than ‘philhellenism’ in the singular, is not in itself a new idea – but Valdez’s work aptly proves the validity of the old saw tot homines, quot sententiae in this particular context. The historians and intellectuals who are the protagonists of Valdez’s book certainly held true to Goethe’s dictum that ‘every man should be Greek in his own way’, and it is this richness and variety of graecophile insight which the author successfully succeeds in capturing.

Although a deeper and more rigorous clarity of argument and structure could have made his analysis more incisive (and the numerous typographical errors in the text are both irritating and regrettable), Valdez’s observations will certainly provide scholars of eighteenth-century intellectual history in general, and of philhellenism in particular, with valuable food for thought.