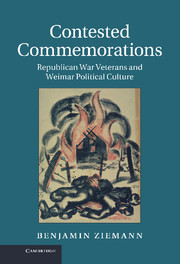 Views of the Weimar Republic as essentially anarchic, unloved and unmourned have been extensively questioned in recent scholarship. Still, popular pronouncements tend to perpetuate such impressions – witness one critic of the current Berlin Metropolis 1919-1933 exhibition at the Neue Galerie in New York, who began his appraisal with the sweeping statement that ‘Nobody in Germany liked the Weimar Republic’.

Benjamin Ziemann’s monograph provides a fascinating and illuminating corrective to such crude generalisations. Focusing in particular on the activities of republican veterans’ leagues within the chequered organisational landscape of postwar Germany, Ziemann scrutinises the ‘symbolism, language and performative power of public commemorations of war’ in order to reveal ‘the participatory potential and performative power of Weimar democracy’. Rather than subscribing to the prevalent ‘brutalisation thesis’ which portrays Weimar culture as stymied and, ultimately, tragically doomed by the stab-in-the-back myth peddled by a myriad traumatised nationalist veterans, he provides a carefully nuanced and readable account of Social Democratic attempts ‘to turn the trauma of war from a liability into an asset of the new democratic system’. The organisation to which Ziemann devotes most attention is the Reichsbanner Schwarz-Rot-Gold, a republican defence league founded in the early 1920s, and he evaluates a range of sources (from pacifist officers’ autobiographies and anti-war novels, to material from the grassroots archives of local veterans’ league branches) to elucidate his thesis.

Eschewing simplistic models, and exploring fully the complexities of the German post-World-War-I experience, Ziemann provides an evenhanded analysis of the strengths and weaknesses of the republican veterans’ movements under discussion, and their strategies of commemoration. Although, with hindsight, the reader knows that this portrait must inevitably be tarnished with failure, the author successfully captures both the heroism and the ambivalence of these Social Democratic endeavours.

Ziemann’s narrative is broadly chronological, beginning with the unstable attitudes to commemoration found in the aftermath of the conflict, and treating the immensely popular rallies attended by massed Social Democratic veterans which broadcast the pacifist “no-more-war” slogan ‘Nie wieder Krieg!’ He does not hesitate to remind us that ‘nationalist mythologies of the war experience were anything but hegemonic in the immediate post war period’; it was only later on that the military and judiciary cracked down on what they defined as ‘treasonous’ pacifist individuals and institutions, leading to some 10,000 charges of high treason being made between 1924 and 1927. Furthermore, the Reichsbanner Schwarz-Rot-Gold, though founded in response to pressure from rightwing organisations such as the Stahlhelm or the SA, was both the largest and most geographically-widespread of all the veterans’ leagues.

Nevertheless, a number of ambiguities lay at the heart of the Reichsbanner’s commemoratory politics. The contested field of war remembrance required conformity to a certain symbolic language of representation which necessarily incorporated military symbols and forms (such as parades and uniforms) – yet many of the league’s members were themselves strongly antimilitarist or pacifist, and were deeply suspicious of any hint of ‘Soldatenspielerei’ (playing at soldiers). Dissent also arose over the propriety (or otherwise) of spending money on memorials that could be dismissed as mere ‘heaps of stones’ (Steinhaufen), rather than funding charitable aid for dependents of the fallen.

That said, particularly through his varied use of ego-documents, Ziemann is able to prove convincingly that republican veterans developed – and defended staunchly, in the face of considerable nationalist opposition – a uniquely Social Democratic perspective on the war and remembrance, based on class ideals, and reconciling internationalism and patriotism. The officer class was portrayed as ‘a separate caste characterised by corruption and moral decay’; from this perspective, the Fronterlebnis (the ‘front experience’ so beloved of rightwing veterans) was far from being an embryonic form of the sacred national community, but was rather marred by chronic divisions and social injustice. Meanwhile, fraternisations such as the Christmas Truce of 1914 were depicted as revealing the ideals of international brotherhood which could theoretically have intervened to prevent the continued slaughter, had the working classes only been allowed some agency in the conduct of the war. It was only in the final years of the Republic, as Nazi violence against Social Democrats rose, and the media became increasingly in thrall to the nationalists, that the rightwing leagues’ modes of remembrance were able to exert an utter stranglehold over those of their leftwing competitors – as witnessed by the state’s swift censorship of the film based on Erich Maria Remarque’s All Quiet on the Western Front in December 1930 (which was partly precipitated by Nazi attacks on the premiere, involving stinkbombs, sneezing powder and white mice).

To conclude, Ziemann’s account shows that, within the veterans’ leagues, there existed an extremely sizeable cohort of loyal and committed republicans who were far more than mere Vernunftrepublikaner. The Republic was ultimately destroyed by the triumph of force and brutality employed by the National Socialists, rather than by any chronic lack of will among its citizens. Thus, Ziemann proves the popularly entrenched canard about Weimar’s fated propensity for failure wrong, demonstrating that there in fact existed a large constituency which fought for the Republic politically and symbolically with all its might.