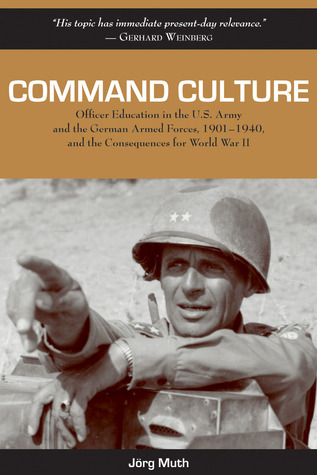 The recent discussion of Jörg Muth’s Command Culture: Officer Education in the U.S. Army and the German Armed Forces, 1901-1940, and the Consequences for World War II (Denton: University of North Texas Press, 2011) on the ‘H-WAR’ Military History discussion list piqued my interest, and I therefore bought a copy, thinking that it could be useful for my own work.

While I do not have the requisite knowledge or experience to comment on Muth’s analysis of the American system of officer education, it is clear from my own research that his treatment of the Prussian Cadet Corps (Chapter 3: “To Learn How To Die”: Kadetten in Germany; pp. 85-112) contains some fundamental flaws.

Throughout the chapter, Muth puts forward claims about the Prussian cadet-schools which simply have no basis in fact. In particular, these focus upon the idea that hazing was not a regular feature of life at the cadet corps (pp. 92, 107), and that it ‘had no chance of surviving’ (p.110); ‘Any systematic hazing was rooted out at the end of the 19th and the beginning of the 20th centuries’ (p.92). With these claims, Muth appears to be trying to prove a general point that hazing in the Prussian cadet-schools was negligible compared with that found at West Point, and that the German system must therefore necessarily be better than the American.

In fact, a cursory look at even a fraction of the extant primary sources on the cadet-schools would show that such hazing was endemic throughout both the system and the corps’ lifespan – and was recorded by the schools’ supporters as well as their detractors.

From this perspective, one of the most frustrating things about Muth’s account of the corps is that it is largely based on a minute proportion of the extant evidence. In general, he cites only four primary sources – namely, autobiographical works by Erich von Manstein, Ernst von Salomon, Friedrich Franz von Unruh, and Leopold von Wiese.[1] Moreover, numerous items of secondary literature which deal with the cadet-schools, including the many articles by Heinz Stübig and Manfred Messerschmidt, and Heiger Ostertag’s Bildung, Ausbildung und Erziehung des Offizierkorps im deutschen Kaiserreich 1871 bis 1918. Eliteideal, Anspruch und Wirklichkeit (Frankfurt am Main, 1999), do not appear to have been consulted.

Often, the evidence used to support Muth’s anti-hazing argument comes from Karl Hermann Brand’s Kadetten. Aus 300 Jahren deutscher Kadettenkorps, Band I. Geschichte des Königlich Preußischen Kadettenkorps (Munich, 1981). This is by no means an impartial source, since it was commissioned from a former cadet by the cadet-school old boys’ network (which remained unerringly faithful to the schools’ ideals and image until the last former cadets passed away in the 1990s), in order to present a positive view of the corps. At other times, the contention is backed up by citation of Felix Dhünen’s Als Spiel begann’s (Munich, 1939), which cannot be used as a source for the Prussian system at all, since its author was a member of the Bavarian corps in Munich (this cannot simply be equated with the Prussian system, even if similarities existed to a certain degree), or by misrepresentation of primary sources, which are denigrated if they do not suit the author’s argument.

Thus, evidence of hazing in Leopold von Wiese’s Kindheit. Erinnerungen aus meinen Kadettenjahren (1924) is dismissed in n.148 as ‘obvious exaggerations’, and it is (tellingly?) noted that the author had ‘a reputation for “falsehood” as a child’. Issue is then taken with those scholars who consider his writing on the schools as “factual”, “reliable”, and “unbiased”. While it is obviously necessary to consider the political context of Wiese’s publication, the similarities which his account bears to numerous other representations of cadet-school life (by friends as well as foes) during this period, seems to militate against its being as false as Muth would clearly like to suggest.

In similar fashion, Muth claims on p.92 that the educators (Erzieher) at the cadet-schools (quote) ‘were generally held in high regard by the cadets in contrast to the tactical officers at West Point who appear in the memoir literature and diaries with a mixed reputation.’

In fact, Erzieher were often seen in negative terms at the cadet-schools as well – a couple of examples of which Paul von Schoenaich describes in his autobiography.[2] One Leutnant T. von B., he tells us, was ‘chronically sadistic… His victim was a cadet T. who was in his room, whom he hazed in an absolutely refined way. His room-mates were forbidden on pain of the strongest punishment possible to speak a word to this completely harmless, but less gifted, youth. He had to eat his breakfast in a corner with his face turned towards the wall. Into the bargain, the boy received such beating from this beast in human form, that he could barely take any more. I never did find out the reason for this ill-treatment.’ Another Erzieher, B., would always complain that Schoenaich’s room was too hot or cold; he would either open the window and leave the cadets to freeze, or make them stoke up the stove when the temperature was already boiling. When the cadets were late for lessons, he would force them to ‘present arms’ for minutes at a time.

Meanwhile, Muth’s claim (p.11) that ‘Though former Kadetten respected and knew each other well, there existed no such mystical brotherhood among them as existed among the West Pointers’ is belied by the evidence contained in the numerous publications and archives of the Prussian cadet corps old boys’ network (from both before and after WWII), held at the Geheimes Staatsarchiv Preußischer Kulturbesitz in Berlin and the Bundesarchiv-Militärarchiv in Freiburg.

Muth’s tendency to make unfounded generalisations, and to present evidence in a way which consistently supports his evident bias towards portraying German/Prussian officer-training institutions as incontrovertibly superior to their American counterparts, is disquieting. As a potentially well-disposed reader, with no particular link either to Germany or America, the tendencies displayed in this chapter have led me to have reservations about the scholarly rigour of the rest of the book – at least as far as the German material is concerned, given that, in stark contrast to the plethora of American archives consulted, no German archives at all (not even the Bundesarchiv-Militärarchiv Freiburg) are listed in the relevant section of the bibliography.

Finally, there are some errors or omissions in Muth’s account of the Prussian Cadet Corps which should be pointed out here:

A) On p.87, Muth seems to be in some confusion as to the nature of the Prussian cadet-school system. He states that ‘all’ the cadet-schools were called Voranstalten (preparatory academies), without making it entirely clear that the Hauptkadettenanstalt (central cadet-school) was an entity completely separate from the Voranstalten; rather, it was the senior cadet-school which cadets would normally go on to once they graduated from their respective Voranstalten. He also never makes it clear to the reader that Saxony and Bavaria had their own cadet corps, which were completely separate from the Prussian corps. Therefore, while it is true that at the turn of the twentieth century there were cadet-schools ‘spread all over Germany’, in Saxony and Bavaria, these belonged to systems different from that which he is describing. These had their own ethos, traditions and regulations, and did not feed straight into the Hauptkadettenanstalt as a matter of course.

C) Oddly, Muth does not mention the Selekta at all – this was a special class which allowed those cadets who were considered most promising to take a fast-track course in military subjects and gain their commissions while still at the HKA, bypassing the Kriegsschule (war academy) altogether. Many of the most renowned Prussian and German generals (such as Hindenburg and Ludendorff) graduated from this class, so it would surely have been helpful for Muth to have spelled this out, as it presumably has considerable significance for his overall subject. The Selekta is discussed at length in John Moncure’s Forging the King’s Sword. Military Education between Tradition and Modernisation – The Case of the Royal Prussian Cadet Corps, 1871-1918 (New York, 1993), which Muth cites often, so it cannot be that he does not know of the Selekta’s existence.