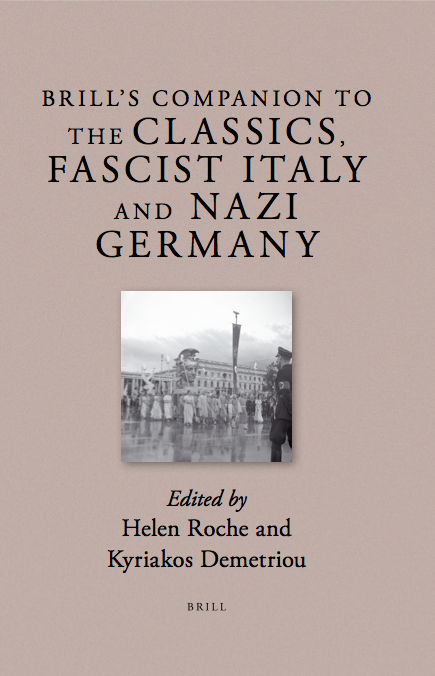 Helen’s most recent edited volume, the Brill Companion to the Classics, Fascist Italy and Nazi Germany (2018) has just received another extremely favourable review in The Classical Journal.

The reviewer, Susan A. Curry, writes:

‘The numerous crises of recent years have so saturated the present that the past has become a foreign country even to those of us in near-permanent residence there. Nonetheless, it is now more important than ever to continue the Selbstkritik of Classics, lately intensified, by scrutinizing how racist governments and the scholars who benefited from and supported these regimes used reductive conceptions of the Greco-Roman past to justify murderous ideologies and their enactment. Brill’s Companion to the Classics, Fascist Italy and Nazi Germany offers a multidisciplinary, multinational selection of essays on “totalitarian Classicism,” examining the way a particular idea of Rome and Greece was deployed in Fascist Italy and Nazi Germany respectively, in order to construct (and sacralize) a nationalistic identification with the past.  Though aimed at “modern historians and scholars of fascism” (4), this volume has much to offer scholars of antiquity already acquainted with 19th and early-20th– century Europe’s appropriation of the Greco-Roman past and includes a few stand-out pieces of interest to the generalist new to this difficult period in the history of classical scholarship. The editors, Helen Roche and Kyriakos N. Demetriou, are to be commended for so successfully juxtaposing the totalitarian Classicism of Fascist Italy with that of National Socialist Germany, as there is much to be gained by examining these two approaches to “totalitarian Classicism” together.’

“As white supremacist groups and authoritarian governments continue to coopt a particular vision of antiquity to lend authority to their own ideologies, this Companion serves as an important reminder of just how destructive these uses of history can become, especially when a charismatic leader and his cronies need only twist and turn the classical ideals already embedded in the culture to serve their own purpose. This Companion is also a disturbing reminder of how often scholars and teachers have instigated and conspired in the dissemination of a particular version of history that aligns with a corrupt leader’s own identification with an idealized past. I very much hope it will help a new generation of scholars appreciate just how much is at stake and how important it is to understand the many complicated ways in which culture collaborates with power.”

To read the review in its entirety, click here.